The number of Africans with access to electricity fell during the Covid pandemic, but $25 billion in annual investments could bring full coverage by 2030, the International Energy Agency said Monday.

The IEA said 600 million people, or 43 percent of the continent’s population, lack access to electricity — mostly in sub-Saharan Africa.

The number of people living without electricity increased by four percent, or 25 million people, between 2019 and 2021, after a decade of progress.

Before Covid, there had been “lots of good developments in countries such as Ghana, Kenya, Rwanda,” IEA chief Fatih Birol told AFP ahead of the release of the Paris-based agency’s African Energy Outlook 2022.

“But because of Covid and the economic difficulties, we see that this positive trend is reversing now,” Birol said.

Russia’s invasion of Ukraine has added to the economic strains on Africa from the Covid pandemic, as the conflict has sent the prices of energy, food and other commodities soaring, according to the IEA.

“When I look at 2022, with the high energy prices and the economic burden on the African countries, I don’t see many reasons to be hopeful,” Birol said.

But Africa could get universal access to electricity by the end of the decade with $25 billion in annual investment, according to the IEA.

Africa is facing more severe effects from climate change than most other parts of the world, despite emitting less energy-related carbon dioxide (CO2) than any other region, the IEA said.

“We have to see a huge amount of investment coming in Africa in all parts of the energy system, but the most important one will be clean energy options,” Birol said.

“We would need to double the energy investments to reach our energy and climate goals.”

Renewables — including solar, wind, hydropower and geothermal — could account for over 80 percent of new power generation capacity in Africa by 2030, the IEA report said.

While Africa is home to 60 percent of the best solar resources worldwide, it only has one percent of installed solar energy capacity, according to the report. 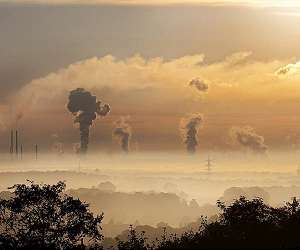 Investing 1% of global GDP into green recovery would cut emissions by up to 8.5%

A novel green recovery investment scenario has shown that a 1% global GDP investment could reduce global CO2 emissions by 6 to 8.5% by 2030. The researchers demonstrated that even a temporary stimulus package could potentially achieve a long-lasting reduction of CO2 emissions from energy production and industrial processes.

The Covid-19 pandemic not only caused a global health and economic crisis but also significantly reduced global CO2 emissions in 2020 by 6 to 7%, compared to 2019. To recover e … read more