The US Senate passed a bill on Wednesday to boost domestic production of semiconductors, the in-demand microchips that power everything from smartphones to cars to weapons.

Global semiconductor supplies were disrupted by fallout from Covid-19 shutdowns, sparking widespread shortages of the chips — many of which are made in Asia.

The legislation, which now goes back to the House of Representatives for final passage, provides $52 billion to increase domestic semiconductor production and more than $100 billion over five years for research and development.

The CHIPS Act was passed in the Senate by a rare bipartisan vote of 64 to 33, with 17 Republicans joining hands with Democrats.

President Joe Biden welcomed Senate passage of the legislation that he said will “accelerate the manufacturing of semiconductors in America, lowering prices on everything from cars to dishwashers.”

“It will mean more resilient American supply chains, so we are never so reliant on foreign countries for the critical technologies that we need for American consumers and national security,” Biden said in a statement.

But Beijing hit out at the details, with foreign ministry spokesman Zhao Lijian saying that while the act “claims to be aimed at improving the competitiveness of US technology and chips, (it) contains provisions that restrict normal scientific and technological cooperation between China and the United States.”

“China is firmly opposed to this,” Zhao told reporters at a regular briefing on Thursday.

The version of the CHIPS Act passed Wednesday provides $39 billion to finance semiconductor manufacturing plants in the United States and another $13 billion for research.

Senate passage of the bill came a day after the South Korean group SK announced a huge investment in US semiconductors and other cutting edge industries.

The conglomerate said in a statement it plans to “increase its new investment in the United States by $22 billion in areas including semiconductors, green energy, and bioscience, creating tens of thousands of new high-tech, high-paying American jobs.”

The firm, which in May reported a positive full-year net profit for the first time in three years, said it logged a net profit of 47.1 billion yen ($347 million), down 58.9 percent on-year.

The slump was also the result of a one-time boost in the first quarter of last financial year when Nissan unloaded Daimler sales.

But the firm said it was facing a range of headwinds.

“During the first quarter, the extremely challenging business environment put pressure on earnings,” Nissan said in a statement.

“Production was constrained by the Shanghai lockdown caused by spread of the new coronavirus, and semiconductor supply shortages, while external factors such as soaring raw material prices and logistics costs also intensified their impact.”

“At the same time, we experienced tailwinds with favourable foreign exchange rates,” he added, referring to the yen’s recent slump against the dollar, which helps inflate overseas profits for Japanese firms.

Operating profit was down 14.2 percent to 64.9 billion yen, but that beat analyst estimates, according to Bloomberg.

The firm was on a rollercoaster even before the disruption caused by the pandemic and the conflict in Ukraine.

It had been struggling with increasing sales costs, and is currently implementing a plan involving slashing models, cutting costs and restructuring operations.

“Nissan is making progress after an excessive expansion policy in North America in the past that was a factor causing it to lose money,” said Satoru Takada, auto analyst at TIW, a Tokyo-based research and consulting firm.

“Profits declined year-on-year relative to the robust rebound in last year’s April-June quarter, when there was a recovery from the pandemic’s impact and cost-cutting efforts,” Takada told AFP ahead of the earnings report.

“Nissan’s challenge is how to minimise the impact of the chip shortage and sell attractive new cars, including those recently released,” he said.

Gupta said the firm was looking to “invest in building greater resilience” as it battles the effects of obstacles such as China’s lockdowns.

He said its suppliers and dealerships had reopened, and “showroom traffic is recovering”.

On chips, he said Nissan was looking to develop alternatives as well as to replace custom-made semiconductors with general-purpose versions.

And he added that the automaker was attempting to cut its use of precious metals in response to the rising cost of raw materials.

“As always, we move forward with cautious optimism while challenging ourselves to maintain (the) four million sales outlook for the fiscal year,” he said.

Nissan has also been buffeted by the saga surrounding its former chief Carlos Ghosn.

The one-time auto tycoon was detained in Japan in 2018, accused of financial misconduct charges that he denies, but jumped bail and fled to Lebanon the following year.

A Tokyo court in March handed a six-month suspended sentence to former Nissan executive Greg Kelly over allegations that he helped his boss attempt to conceal income.

The company had pleaded guilty in a separate case, and was ordered to pay a fine of 200 million yen.

In April, French authorities issued an international arrest warrant for Ghosn, who has lived in Lebanon since his daring getaway from Japan, on allegations including corruption, misuse of company assets and money laundering. 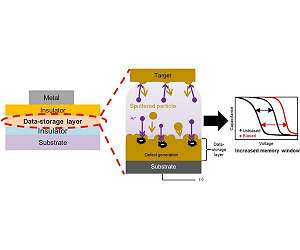 
Bumper cars are enjoyed by people of all ages as riders deliberately bump into other vehicles nearby. Recently, new technology has emerged that dramatically improves the performance of flash memory by a strong ion bombardment process. This memory platform can reliably express multiple data in a single device, rendering it applicable for future neuromorphic computing as well as increasing memory capacity.