Mexico on Friday announced measures to ease water shortages in the northern industrial powerhouse of Monterrey, including a new aqueduct, another dam and more wells.

The plan aims to guarantee water supplies for the northern city over the next decade, President Andres Manuel Lopez Obrador said.

Residents of Monterrey, one of Mexico’s wealthiest cities, have faced weeks of water rationing due to a dearth of rain and, according to environmentalists, poor resource management.

Monterrey, whose metropolitan area is home to around five million people, has a shortfall of 3,000 liters (nearly 800 gallons) of water per second, Lopez Obrador said.

“Even once it has started to rain, it will take time” to solve the problem, he added.

About $770 million will be spent to build a 100-kilometer (62-mile) aqueduct that in 18 months will connect the El Cuchillo reservoir with Monterrey, providing 5,000 liters per second, Lopez Obrador said.

The announcement came two weeks after the government declared a drought emergency to enable authorities to take special measures to guarantee water supplies in hard-hit areas.

Among the measures, holders of water concessions for agricultural or industrial use can be ordered to allow their use by third parties. 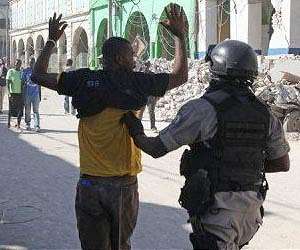 
The United Nations Security Council agreed Friday to ask member states to ban the transfer of small arms to Haiti, rocked by deadly gang violence, but stopped short of a full embargo requested by China.

Bloodshed in the Caribbean nation has been soaring – alongside fuel shortages and rising food prices – with at least 89 people killed in the Port-au-Prince capital region alone this week. Aid agencies have said many areas are dangerous to access.