Much ado was made about the Higgs boson when this elusive particle was discovered in 2012. Though it was touted as giving ordinary matter mass, interactions with the Higgs field only generate about 1 percent of ordinary mass. The other 99 percent comes from phenomena associated with the strong force, the fundamental force that binds smaller particles called quarks into larger particles called protons and neutrons that comprise the nucleus of the atoms of ordinary matter.

Now, researchers at the U.S. Department of Energy’s Thomas Jefferson National Accelerator Facility have experimentally extracted the strength of the strong force, a quantity that firmly supports theories explaining how most of the mass or ordinary matter in the universe is generated.

With Jefferson Lab data, the physicists were able to determine the strong force coupling at the largest distances yet. Their results, which provide experimental support for theoretical predictions, were recently featured on the cover of the journal Particles.

“We are happy and excited to see our effort get recognized,” said Jian-Ping Chen, senior staff scientist at Jefferson Lab and a co-author of the paper.

Though this paper is the culmination of years of data collection and analysis, it wasn’t entirely intentional at first.

A spinoff of a spin experiment

“This is both a curse and a blessing,” said Alexandre Deur, a staff scientist at Jefferson Lab and a co-author of the paper. “While we have to use more complicated techniques to compute this quantity, its sheer value unleashes a host of very important emerging phenomena.”

This includes a mechanism that accounts for 99 percent of the ordinary mass in the universe. (But we’ll get to that in a bit.)

Despite the challenge of not being able to use the iterative method, Deur, Chen and their co-authors extracted strong force coupling at the largest distances between affected bodies ever.

They extracted this value from a handful of Jefferson Lab experiments that were actually designed to study something completely different: proton and neutron spin.

These experiments were conducted in the lab’s Continuous Electron Beam Accelerator Facility, a DOE user facility. CEBAF is capable of providing polarized electron beams, which can be directed onto specialized targets containing polarized protons and neutrons in the experimental halls. When an electron beam is polarized, that means that a majority of the electrons are all spinning in the same direction.

These experiments shot Jefferson Lab’s polarized electron beam at polarized proton or neutron targets. During the several years of data analysis afterward, the researchers realized they could combine information gathered about the proton and neutron to extract strong force coupling at larger distances.

“Only Jefferson Lab’s high-performance polarized electron beam, in combination with developments in polarized targets and detection systems allowed us to get such data,” Chen said.

They found that as distance increases between affected bodies, strong force coupling grows quickly before leveling off and becoming constant.

“There are some theories that predicted that this should be the case, but this is the first time experimentally that we actually saw this,” Chen said. “This gives us detail on how the strong force, at the scale of the quarks forming protons and neutrons, actually works.”

These experiments were conducted about 10 years ago, when Jefferson Lab’s electron beam was capable of providing electrons at up to 6 GeV in energy (it’s now capable of up to 12 GeV). The lower-energy electron beam was required to examine the strong force at these larger distances: a lower-energy probe allows access to longer time scales and, therefore, larger distances between affected particles.

Similarly, a higher-energy probe is essential for zooming in for views of shorter timescales and smaller distances between particles. Labs with higher-energy beams, such as CERN, Fermi National Accelerator Laboratory, and SLAC National Accelerator Laboratory, have already examined strong force coupling at these smaller spacetime scales, when this value is relatively small.

The zoomed-in view offered by higher-energy beams has shown that mass of a quark is small, only a few MeV. At least, that’s their textbook mass. But when quarks are probed with lower energy, their mass effectively grows to 300 MeV.

This is because the quarks gather a cloud of gluons, the particle that carries the strong force, as they move across larger distances. The mass-generating effect of this cloud accounts for most of the mass in the universe – without this additional mass, the textbook mass of quarks can only account for about 1% of the mass of protons and neutrons. The other 99% comes from this acquired mass.

Similarly, a theory posits that gluons are massless at short distances but effectively acquire mass as they travel further. The leveling of strong force coupling at large distances supports this theory.

“If gluons remained massless at long range, strong force coupling would keep growing unchecked,” Deur said. “Our measurements show that strong force coupling becomes constant as the distance probed gets larger, which is a sign that gluons have acquired mass through the same mechanism that gives 99% of mass to the proton and the neutron.”

The conformal in “Conformal Field Theory” means the technique is based on a theory that behaves the same at all spacetime scales. Because strong force coupling levels off at larger distances, it is no longer dependent on spacetime scale, meaning the strong force is conformal and AdS/CFT can be applied. While theorists have already been applying AdS/CFT to QCD, this data supports use of the technique.

“AdS/CFT has allowed us to solve problems of QCD or quantum gravity that were hitherto intractable or addressed very roughly using not very rigorous models,” Deur said. “This has yielded many exciting insights into fundamental physics.”

So, while these results were generated by experimentalists, they affect theorists the most.

“I believe that these results are a true breakthrough for the advancement of quantum chromodynamics and hadron physics,” said Stanley Brodsky, emeritus professor at SLAC National Accelerator Laboratory and a QCD theorist. “I congratulate the Jefferson Lab physics community, particularly, Dr. Alexandre Deur, for this major advance in physics.”

Years have passed since the experiments that accidentally bore these results were conducted. A whole new suite of experiments now use Jefferson Lab’s higher energy 12 GeV beam to explore nuclear physics.

“One thing I’m very happy about with all these older experiments is that we trained many young students and they have now become leaders of future experiments,” Chen said.

Only time will tell which theories these new experiments support. 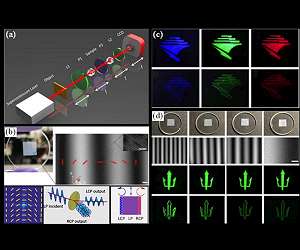 
When a beam is reflected (or refracted) at optical interface or propagating through an inhomogeneous medium, photons with opposite spin angular momenta will separate with each other, resulting in a spin-dependent splitting of light, and this phenomenon is called the photonic spin Hall effect (SHE). The photonic SHE is a fundamental physical effect that originates from the spin-orbit interaction of light.

It can be regarded as an analogue of the spin Hall effect in electronic systems: the right-han … read more